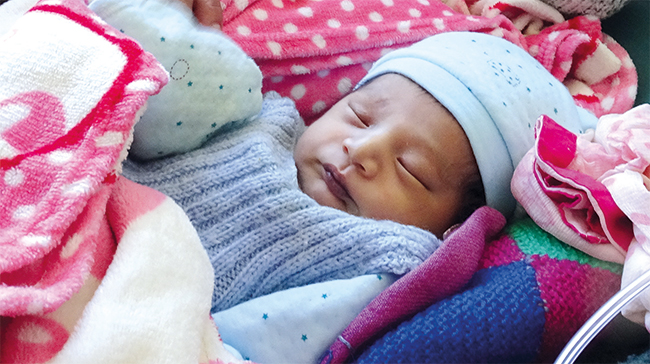 For babies to survive in OCH, they need to be able to breathe by themselves. We don’t have ventilators for newborns. Recently a newborn baby with serious breathing problems put us to the test and won – he miraculously came round when his life seemed on the edge. Here is his story.
Day 1  Abishek* was born by C-section 10 days after his official due date. However, he looked premature, possibly only around 36 weeks’ gestation. Several hours after birth he had persistent cyanosis (blue colour) of his face and his blood oxygen level was low. He was admitted for incubator care, IV fluids and oxygen via facemask.
Day 2  He was holding his own. Pink and breathing easily. We trialled him off oxygen and started breastfeeding. However, he deteriorated over the next hours. That evening continuous positive airway pressure was commenced to improve his oxygenation.
Day 3  He had a ‘cyanotic attack’ in the morning - his blood oxygen level was only 45%**. We used a laryngeal mask and active ventilation which improved his oxygen levels to 93% and he became pink.  However even with ongoing ventilation his oxygen level dropped to 60%. The diagnosis then was 'Respiratory Distress Syndrome of Prematurity'. We decided to give him only oxygen by facemask and to continue IV fluids. We made the difficult decision that if he stopped breathing we would not do any active resuscitation, because we had no ventilator to keep him alive. Two hours later, he looked very ill. Oxygen levels varied between 0 and 60%.  The prognosis was bleak. The ‘Not for Resuscitation’ order was maintained.
But unbelievably, over the ensuing hours of that day and night, his oxygen levels improved dramatically and by the next morning, he was maintaining 96% just on oxygen via facemask. We decided to do active resuscitation if needed.
Day 4  Abishek was looking much better. We started him on tube feeds of expressed breastmilk.
Day 5  The improvement continued, he had started to gain weight and he was tolerating feeds.
He was finally discharged on day 7 of life – amazing!
We give thanks that through our staff and resources and prayers we were able to keep him alive and bring him round even without a ventilator, and during lockdown when travel to bigger hospitals in other districts would have been very difficult.
NOTES:
* Name and photo changed. More detailed medical report available on request.
** If the blood oxygen level is below 90%, it is considered low.