Story from Doti under Peacebuilding 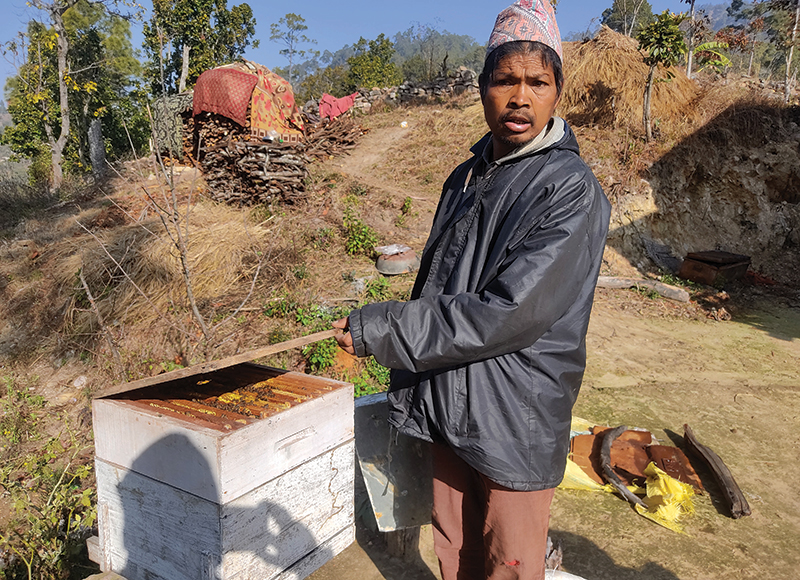 Dabal Bahadur Kami runs a beekeeping business that has helped him to be financially independent.
Dabal Bahadur Kami, aged 50, has a physical disability and was living in poverty with his family of five in Doti. He injured his back in an accident, causing poor mobility and speech problems; he communicates with his family using sign language.
Due to low crop yields and no other source of income, he struggled financially even to provide food for his family. Also, his son was born with a disability, which added to his challenging responsibilities. With the community’s discriminatory attitude towards people with disabilities (PwD), he felt stigmatised, depressed and hopeless.
Under UMN’s Community-Based Rehabilitation Project, partner DSO* formed a Self-Help Group (SHG) of PwD in his community and people like Dabal were encouraged to join. The project staff regularly taught them about the rights and entitledments available for PwD from the state. Dabal actively participated and gradually developed leadership skills. Later, he was selected for the Disability Rights Protection Committee of his ward, representing his SHG.
As a SHG member, he expressed an interest to start income generation work and came up with a plan for a beekeeping business. His group recommended him as a suitable candidate to receive start-up assistance. With the NPR 25,000 (USD 196) he received, he purchased four beehives and earns NPR 40,000 (USD 314) annually from this business. He has opened a bank account in his child’s name to start a saving for him. With a good business setup, he now plans to promote beekeeping commercially and further increase the number of hives.
Dabal is now financially independent and happy. As a group member he participated in the decision-making process. He is successfully running his own business which in turn helps to provide for his family’s food, education, and medical expenses. With the plan to expand his business, Dabal shares, “I am thankful for the SEED money. I now feel respected in my community as they invite me to meetings and ask for my thoughts. All credit goes to the organisation and the group for what I have now.”
* Disabled Service Organisation (DSO)