Speaking Out in Doti

Story from Doti under Advocacy 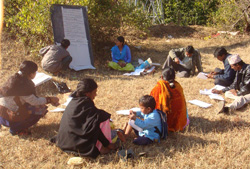 A community training program in Doti, facilitated by UMN staff

Despite Nepal's participatory and inclusive local planning laws, local plans and budgets are often decided by an elite few who are largely unaccountable. Advocacy's new initiative is a pilot programme to improve governance and accountability in Doti District.

UMN and its partners raised awareness about the laws, supported communities to develop their own proposals, and used the media and local groups to build pressure for good governance and accountability.

As a result, around NRS 1 million (USD 13,300) worth of projects that reflect the community's own concerns - water supply and irrigation, road survey and construction, and school building - are now being funded by local government. 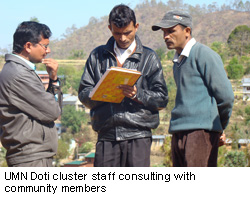 The practical impact is significant, but so is the change in community attitudes. People who had never spoken about their concerns before have been able to speak out and are working to hold their leaders accountable. Even VDC* Secretaries were surprised and encouraged to see so much community participation. Barma Devi Kahti, a community member, said, "We hadn't seen such a participatory and fair VDC council meeting in previous years."

This pilot project will be extended to other clusters in the coming year.

* VDC = Village Development Committee. The VDC is the local government structure in Nepal.