Story from Rukum under Peacebuilding 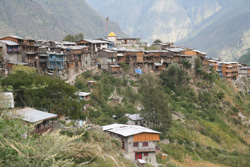 On a sunny hillside in Rukum, a group of women in bright cotton saris are working in a field - a commonplace scene. But this is a remarkable group of women.

Each one is a widow, and most lost their husbands suddenly, violently.

In 1998, Rukum District was the flashpoint of the violent insurgency that plunged Nepal into 14 years of virtual civil war. So many died. Police, Maoists, party activists, public servants... and ordinary villagers. Their wives and children were left to fend for themselves in a society too poor to afford social security, and too damaged to provide communal support.

Around Rukum, they say that, if first thing in the morning you see a widow's face, you will have bad luck all day. 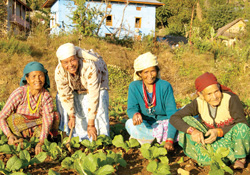 A small group of Rukum believers established the Christian Society Development Corporation (CSDC). They wanted to serve the most vulnerable, the ones Jesus would have noticed and cared for - the widows. In partnership with UMN, CSDC brought these women together in groups, and helped them rent small fields to grow crops. This year, they've made a good profit, and are using it to start small enterprises, pay off debts, and send their children to school.

But more than this, CSDC has helped them find a unity of purposes that brings together women from both sides of the terrible conflict to begin community healing. As one woman put it: "Now we can join together to fight poverty and discrimination, not each other."