Story from Mugu under Peacebuilding 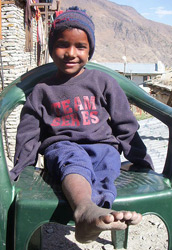 High in the Himalayas, Mugu is a very steep, remote district about seven days' walk from the nearest road. It's a tough place to live, with some of the lowest development statistics in the country. UMN has been working in Mugu since 1999.

Somati (5) lives in a village two days walk from the Mugu district centre. In July 2009, she fractured her leg in a fall. As the health post attendant was absent, her parents sought help from a traditional healer. He applied a poultice, but the leg became infected. Somati was in terrible pain. Her father carried her for two days to the district hospital. Unfortunately, there was no doctor present, so the hospital directed him to UMN. Somati's leg was terribly swollen. 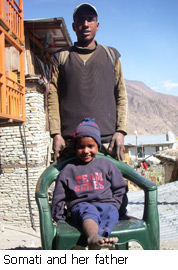 UMN sent Somati to a hospital in Kathmandu. She was immediately taken for emergency surgery, as the infection meant that her life was in danger. Her distraught father, exhausted after all his efforts, was told her leg would have to be amputated. Knowing how difficult life would be for his daughter in his mountainous village, he refused permission, saying: "It would be better if she died."  Staff from Saathi Sewa (an organisation with close links with UMN), who were assisting the family at the hospital, persuaded him to give his consent, and sat with him through the night as the operation took place. Somati's left leg was amputated just below the hip.

Somati has been fitted with a prosthetic leg and has commenced school, although this will be interrupted by her regular trips to Kathmandu for the treatment she still needs.

She is poor, disabled, and lives in a very difficult place. But she has some important things going for her, too. An opportunity to get an education, support from a local UMN partner organisation - and a father who loves her!