Story from Sunsari under Education 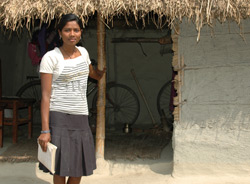 Nineteen, unmarried, and still at school! Rekha turns a deaf ear to the teasing. When she completes her schooling later this year, she will be the first girl in her village to do so. Rekha nearly missed out on school altogether. Born to a poor family in Sunsari, one of the plainland districts in Nepal, Rekha worked hard to allow her five younger sisters to get an education. She longed to go to school herself, but then, who would do the housework and help raise the little ones? As the eldest, that was her responsibility.

At 13, Rekha's parents allowed her to attend Non-Formal Education classes in the evening, while she worked during the day. Balancing school and work was tiring, but Rekha had no other option. When she turned 16, Rekha's father decided it was time for her to marry. She was determined not to leave school to be married off and continue a life of drudgery and poverty. At that time, Partner Mobilization Centre, a UMN partner, was providing a limited number of education scholarships in her village. She applied, and was accepted. Now her hard work has paid off, and this courageous young woman has realized her dream.