Story from Bajhang under Peacebuilding 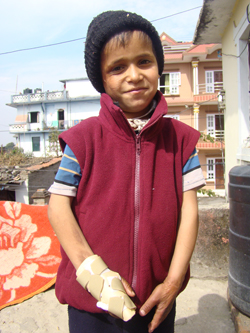 It's a sad, but common story. A little child is lying beside the open fire, left in the care of older siblings while the parents are out working in the field. His brother, just a small child himself, is playing with kerosene. Suddenly, the fire flares up. The older children escape, but the baby is badly burned.

This is what happened to Balu Upadharya, when he was just three months old. Both his hands were badly damaged. His father, a poor daily labourer in a remote village in Bajhang, took his son to a local healer. Balu was fortunate to survive the severe burn and resulting infection. His parents took him to the Bajhang Hospital, where the wounds were healed. But the scar tissue on his hands contracted, and he was unable to move his fingers and use his hands normally.

Then, when Balu was three years old, his father died. This left his mother with three sons (one with a disability) and a daughter, and little to live on.

When Balu's family heard about UMN's work in Bajhang, they came to the office. When UMN's Rehabilitation Co-ordinator visited in 2011, Balu was selected for reconstructive surgery in Kathmandu. The first round of surgical correction was done on his left hand, and the results were good. This year, in January, he came to have the contractures in his right hand released. He is staying with Sathi Sewa (a Christian organisation that provides support to people from remote areas who come to Kathmandu for medical treatment) with his brother.

When he returns home, Balu wants to go to school. His ambition is to become a primary school teacher, and serve his own community. He particularly wants to help prevent burns, and burn contractures. Balu will make an excellent Rehabilitation Ambassador in his village!