Being There for Rita

Story from Dhading under Health 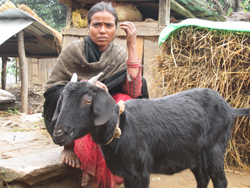 Rita Adhikari, a middle aged woman, lives with her poor family in Mapark, Dhading. She and her husband could not support her family on what they could earn locally, so her husband went to work as a daily labourer in India.

He stayed there for a long time to earn money. Then one day he returned to Nepal because he suffered from an unknown disease. He was very ill, so Rita took him to hospital for treatment. They both were shocked to hear that he was infected by HIV, and Rita was also HIV positive. The news spread all over the village. All their neighbours would have nothing to do with them, and they became helpless.

UMN's partner, Nari Jagaran Kendra (NJK), came to work in this village to implement the Anti-human Trafficking Project.  As part of the project, Rita got a chance to enrol in one of the women's groups. NJK also helped the group to select some very poor women for income generation support. NJK taught the women's groups and other community members about women's rights and other emerging issues in that particular community. The group members worked as helping hands to rehabilitate Rita. She got selected for their income generation scheme, and participated in a business plan workshop. She prepared a plan for goat rearing, got a loan of NRP 4,500 (AUD 53) from the revolving fund, and added some of her own money to it to buy a goat.

Now, she has already sold her baby goats for NRP 5200 (AUD 61). With that small amount, she is supporting her family.  In addition, her family is getting support from other places. She says, "I would like to encourage those women who have faced such problems to join withi an organisation such as NJK, which has helped me to fight against my problems. I am very grateful to NJK for being there for me."

Handover of medical assistance package
May 7, 2020