Kafalpani is on the Right Track

Story from Dhading under Advocacy 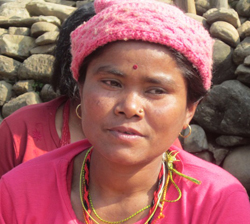 Lok Kumari Gandrama, who lives in Kafalpani, says: "Previously, it was not possible to walk along the road to our village in the rainy season. We used to use another path, which took us half an hour more. But now it is very easy for us to bring water to our homes and to go to work in the field."

Lok Kumari is the chairperson of Kafalpani Chilaunechautara Narrow Track Maintenance Committee. Dalits (low caste people) and Janajatis (minority ethnic groups) are in the majority in the Kafalpani area. They did not have the courage to visit the VDC office to share their problems. They used to get assurance from the leaders and social workers of the village only when they shared their problems. They were unaware of the budget allocated for their village in different government sectors.

UMN's partner Jagatjyoti Community Development Society (JCDS) gathered the local community to orient them about the Participatory Planning Process and Local Independence Governance Act, and to identify the problems of the village by conducting the programme. Initially, 22 local problems were identified and subsequently they were ranked in priority order. The most essential, the Kafalpani Chilaunechautara Narrow Track, was proposed for submission to the VDC.

The locals of that community are excited that the VDC allocated the budget for their plan. They now understand that the budget allocated for their VDC is for the development of their own community, and they know the process they need to use to access it.