Salt of The Earth!

Story from Dhading under Sustainable Livelihoods 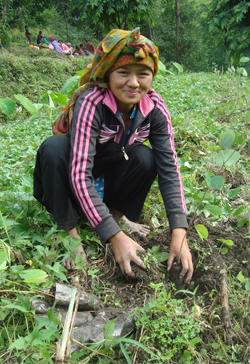 Kabita Tamang lives in Jharlang VDC in northern Dhading. Her main income source is from farming, for which she uses traditional technologies. However, production was low, and she was not satisfied because she put a lot of hard work into it. She wanted to increase her production but she faced lot of problems, such as losing topsoil from the sloping land, low fertility, and not having access to newer technologies. She thought a lot about how she could improve her farming.

In 2008, UMN's local partner HIMS organised a training on Sloping Agricultural Land Technology (SALT) which was supported by UMN's Dhading team. Kabita participated in that training. She learned to manage her sloping land by using SALT methods, including grass plantation and soil protection. After the training, she started to apply her new-found knowledge to her 3 ropanies (1500 m2)of land and improved her land by planting various grasses and shrubs.

Nowadays those plants are growing and are producing a lot of nutritious fodder, with which Kabita has started commercial goat farming. She is getting enough fodder from her own fields without having to cut fodder from the forest. She has also been able to increase her grain production and has planted green vegetables.

She is very happy with her green environment, and wants to say thanks to the supportive organisations which provided such useful training. She is very keen to continue this process and wants to share this technology with her neighbours.