A TV programme plants a seed

Story from Dhading under Good Governance 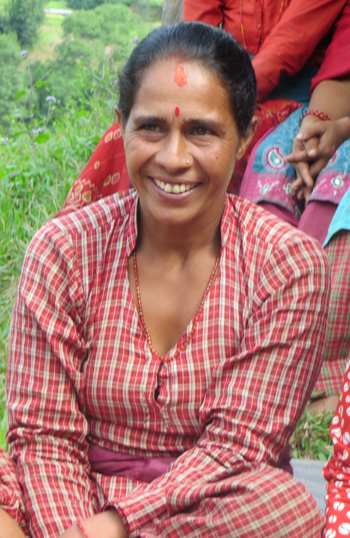 At 35 years of age, Kanchhi Gautam from Jiwanpur watched television for the first time at her village on 2008. Her brother bought the set after earning the money from abroad. She got this opportunity because her family settled in her birth place, despite her marriage in another district.

One programme she watched was a documentary on Nepali television about women's involvement in social activities. There was an illiterate woman leader in the documentary, leading a group in the village and having significant impact in the community through the group. Women were involved in different types of social activities.

The documentary really touched to Kanchhi's heart and planted a tree of hope in her life to do something good for the community. After watching the documentary, she planned to form a women's group in her village and share with her friends about the documentary, as well as her vision or dream. She successfully conducted the first meeting with 11 women secretly in the quiet place, as women were not allowed to be involved in the social activities at that time. Similarly, the group successfully conducted a second meeting with 20 women, and third meeting with 35 women, without any support from outsiders, even from the men. They also put aside NPR 50 (AUD 0.57) as their monthly savings from the beginning.

They faced challenges from the villagers between first and third meetings. Villagers especially accused Kanchhi, saying that she will leave the village after collecting the money from the group members, as her husband's house was far away. Despite these types of challenges, all group members trusted Kanchhi and were committed to make her dream come true.

Now the group is getting support from CIRDS, one of UMN's partners, for awareness and group management-related issues. They discuss social issues, anti-human trafficking issues and safe migration issues in their regular meetings. They can easily share their learning from the group with the family and others. In addition to this, they are actively involved in supporting women who experience domestic violence,helping women and families to get justice, and working towards reunion and reconciliation, where appropriate.

Because of positive impacts seen in the community by women's involvement in the group, all villagers including all group members now respect to Kanchhi, and everybody says that "this is because of Kanchhi's vision or dream that was dreamt five years ago".

UMN partners with Government of Lumbini during crisis
May 5, 2021