Story from Rupandehi under Peacebuilding 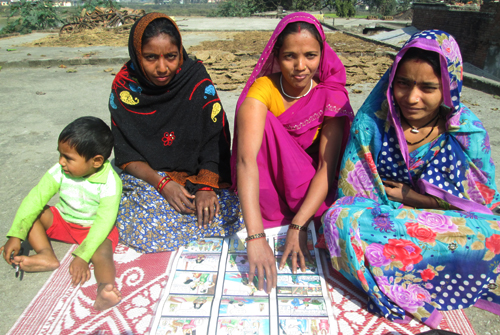 Twenty-two-year-old Kausilya Chaudhary belongs to the Madhesi Terai community and lives with her family in Rupandehi. She has one son and one daughter. She is a good facilitator of her adolescent group.

In her part of the Terai*  there is a tradition that daughters-in-law are called by the birth place name or name of the father-in-law. If the women are called by their own names, it is thought to be an insult to the family. Kausilya was called by her father-in-law's name "Makhan-ki Buhari" (Makhan's Daughter-in-law). It made her sad, but she didn't have the courage to make a fuss. She wanted to be able to introduce herself by her own name, not by someone else's name. It was a great challenge for her to go against the tradition of community and family. She had been searching for way to meet this challenge.

At that time, SSS and UMN launched a pilot project at her community. She was encouraged to participate in a training programme on gender issues. She gained knowledge and skills, and became a group facilitator for her group. She decided to overcome the traditional challenge of names. First, she asked her husband to call her by her own name. Then, she asked her other family members and neighbours to use her name. Whenever they called by her previous name, she gently said: "I am Kausilya, please call me Kausilya." When she conducted sessions with groups, she introduced herself as Kausilya, and asked other members to introduce themselves in their own names as well. Now everyone in the community knows her name. They use her name with respect - volunteer Kausilya.

She says "It is the beginning of change and development, which I could not have expected before."

*Terai: the plainland along the southern border with India. The Madhesicommunity are ethnic Indians who have been living in Nepal for generations.