An amazing taste - better than meat!

Story from Doti under Health 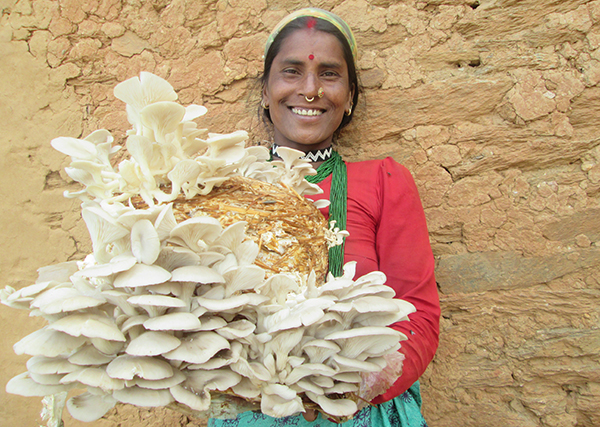 Batuli proudly displays her mushroom crop.
Baglek is a remote VDC in Doti, where UMN's partner CEAD Nepal has been working on the Food Security for Vulnerable Communities in Nepal (Uttam Aahar) project. This programme focuses on the promotion of agro-based income generating activities for needy families. Mushroom production training was conducted in Baglek VDCs for the Self Reliant Groups (SRGs), the women's groups in the community.  Fifteen women received mushroom production training; eight of them are producing mushrooms for commercial purposes.
Batuli Nepali (name changed) lives in Baglek. Now she is 35 years old. She has a husband, two daughters and a son. The three children are studying at the local government school. Together with her husband, she is busy in the fields; it is the main source of income for her family. This production is not enough to feed the family for a whole year. It is hard to buy food and educate the children, so her husband used to come to Nepal and go back to India seasonally.
Five years ago, he became ill in India and returned to Nepal. During his treatment, he discovered that he is HIV positive. Unfortunately, she (Batuli) now also has HIV, but not her children.
Batuli joined a savings and credit Self Reliant Group, a women's  group formed by CEAD Nepal, two years ago. Members of that group encouraged her to go to the regular monthly meeting, where savings and credit activities and regular discussions on health issues were held. These include HIV and AIDS and nutrition.The group also shared different ideas about income generation. This year, she got the opportunity to attend mushroom production training. There she learned the skills and after the course, started mushroom production. "I was so excited when I saw the bunch of growing mushrooms in the sack for the first time," she remembers. "I had not seen this before. We cooked them. What an amazing taste - better than meat! I am also drying some mushrooms and storing them for use when vegetables are scarce."
She produced 5 kg of mushrooms from each sack, and sold them in the market, earning NRP 1500 (EUR 13) last month. She is also using them in the household, providing a nutritious vegetable for her family. She is telling others in the community about the advantages and the nutritious value of mushrooms, to motive people to take up mushroom production. She wants to produce mushrooms on a larger scale for marketing.

Some more help reaches the hills of Rukum East
July 7, 2021