Story from Doti under Health 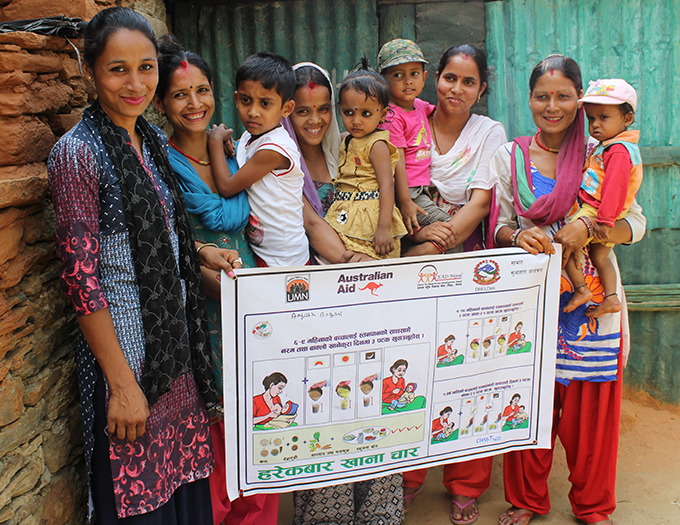 Mothers with children between the age of six months and five years visited the Positive Deviance Hearth (PD Hearth) Centre located in Doti. Mothers and caretakers of children who are identified as malnourished are encouraged to come to the centre.
Kaushila Bogati, 25, is one of the members of the group. During a camp held by UMN's partner Centre for Equal Access Development (CEAD) to identify undernourished children, her child was found malnourished. “I was at my mum's place during that time, so my mother-in-law took my son to the camp.” she says. “My son was almost five and weighed only 14 kilograms. I was asked to join the group.”
Once women like Kaushila join the centre, they meet for two hours every day for two weeks along with their children. All the members bring ingredients to the centre to cook nutritious food together and feed their children. They also learn about and discuss health, nutrition, personal hygiene, sanitation, feeding behaviour and many other health-related issues.
Before joining the centre, Kaushila used to feed her son the food that was cooked for the family, which was not necessarily packed with the right nutrition. But after joining the group, she learned that the baby's food needed more attention. Today her little one enjoys all the health benefits of fresh fruits and leafy vegetables, multigrain, jaulo (a mixture of rice, lentils and vegetables) and meat. Now her son is showing signs of better health.
Today he weighs 16½ kilograms and is healthy and happy. "I have seen the change in my son,"she says. "If a child in my neighbourhood is malnourished, I am willing to teach what I learnt."
After joining the centre, children from 16 households of Mudegaun gained normal weight in a span of three to four months. The progress is clearly visible.