A career change at sixty!

Story from Nawalparasi under Sustainable Livelihoods 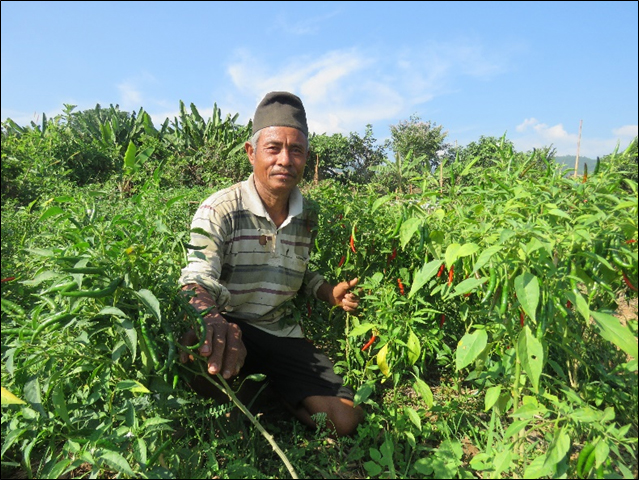 Sixty-year-old Pitam Soti was a labourer in construction all his life and usually worked outside his home village of Jhate, in Hupsekot Rural Municipality. He was aging and the physical masonry work was getting harder for him. So, over the last year he rarely left the village for work and instead engaged in subsistence-based agriculture at home. He was facing some financial crisis since his son was still at college, studying in Grade 11, and he needed to provide for his education.
During these difficult times, UMN’s REWARD project brought a ray of hope as it gave him an opportunity to upgrade his farming skills and techniques. The project activities looked promising to Pitam and he got involved as a secretary in the Pragati Baba Agriculture Group. He attended all the training related to agriculture and was also an active member of the ‘Integrated Pest Management’ training.
Hard-working Pitam applied all his learning in his vegetable field. As a result, he is moving towards becoming a commercial farmer in his village. In around 0.2 hectares of land he is currently growing mustard and beans. He is also growing vegetables such as chilli, onion, garlic, tomato, aubergine, broccoli, spinach, radish and more in around 0.05 hectares of land. It is the first time that he has grown such vegetables and other crops on a large scale. Within a short time, he was able to sell chilli and spinach, earning NPR 40,000 (approx. USD 340). The remaining vegetables and crops are yet to be sold in the market.
Pitam is very happy and optimistic with this outcome and is on the way to becoming a role model in his community. He shares, “I am farming on a large scale for the first time and the initial results seem satisfactory. I will do more in the coming days and wish to become a successful farmer.”