Story from Sunsari under Sustainable Livelihoods 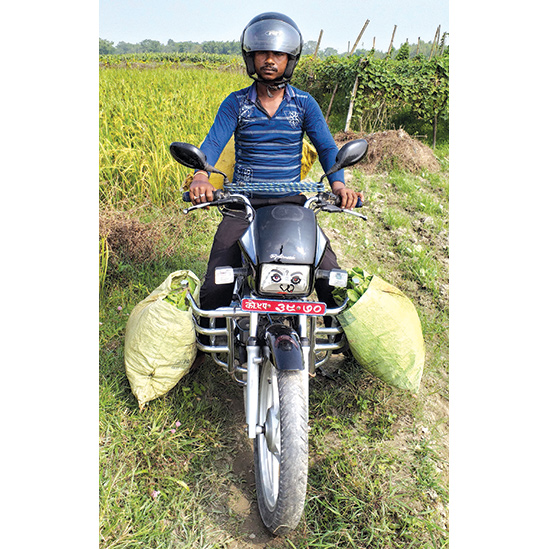 In a community of 106 Musahar families in Sunsari district, no-one had a toilet or had their birth registered. Their landless situation combined with poor education (7.3% literacy; less than 50% of primary-age children in school) have traditionally forced these Tarai Dalits* to be farm labourers, accepting very low wages due to their poor bargaining position. They depended on seasonal agricultural work and seasonal migration, with children working to contribute to the family income. They didn’t have a reliable regular source of income and there were no reserves for hard times.
Over a period of three years we worked with 20 families. This started with forming a self-reliant group which gave teaching and coaching to increase skills in their vegetable production.  Further intensive training was needed to increase confidence and entrepreneurial skills. They encountered challenges such as the landlord (from the higher Mehata caste) refusing to lease his land to them and other landlords banning Musahar farmers from walking through their land. However, with the help of the group they were able to negotiate with the landlords to allow access, while one Mehata lady who had a strong desire to uplift Musahar people made some land available for lease. The farming became possible. Justice came in the process of improving their well-being.
Our target group received help with market connections too. It was necessary to give extra support to facilitate vegetable traders as well as production. Three people then started trading, while 18 other Musahar families have also taken up vegetable cultivation.
The self-reliant group also created an environment to raise awareness of the importance of education, sanitation, hygiene and financial security. Today, of the 20 families, all children are enrolled in school and studying, all children have their birth registered and all families have a toilet. The practice of saving began. People are also starting to participate in life insurance.
Musahars previously were never included in different committees such as management of open-air markets, rural municipality consultation, road construction and local festivals. But after improving their economic and social status they are now consulted, valued and included in different committees of their community.
For more photos and details on this project, please see pages 4-5 of this newsletter: www.umn.org.np/new/publication_files/umnews65.pdf
*  Belonging to a so-called lower caste community and living in the flat land in the south of Nepal