Change begins with me – a husband!

Story from Nawalparasi under Peacebuilding 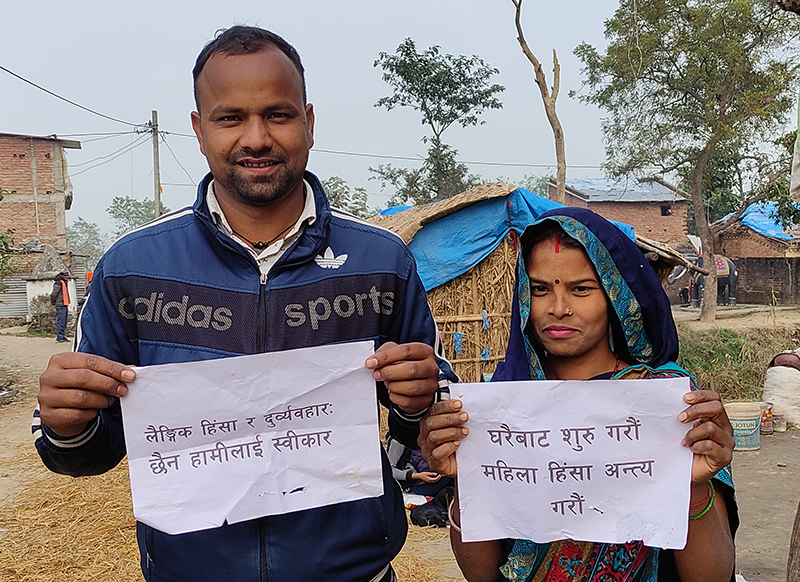 Prakash: We don’t accept mistreatment and gender-based violence!
Sunita: Let’s start from the home – let’s forbid violence against women!
Prakash Chandra Kewat, a gender champion of UMN’s Gender Equality Project, once thought that women were meant to stay at home and cover all the household work. Since childhood, this was what he saw and learned. As he grew up, he never saw his father engage in any household chores nor did he see any men in his neighbourhood do housework.
"Until a year ago, washing clothes, doing dishes and cooking as the head of the family was a matter of shame for me. Helping a wife in her daily chores would cause social gossip and a disgrace among men. But now, cooking for my wife and my children is a privilege for me.  It is a joy to be able to serve them,” shared Prakash, who is a resident of Nawalparasi District with his wife Sunita, two daughters and a son.
Prakash joined a couples’ group formed by UMN’s project a year ago. Throughout the year, he attended several meetings and numerous gender equality training sessions and took part in participatory action-reflection training. The most effective of them all was a reflection during participatory action-reflection training were they were asked to reflect on “what would make us different from other men?”. This reflection was eye-opening and awakening. Prakash shared, "I got a chance to challenge my bad gender stereotypes and superstitious beliefs. I had a strong realisation that I would not be able to change the world around me without changing myself in the first place!”
Prakash recalled how his sisters were married at a young age and were given dowry. “Having witnessed this while growing up, I held a belief that it was a rewarding thing to be able to receive as much dowry as one could. But after I became a member of the couples’ group, I learned many things about gender stereotypes and inequalities, women's rights, the dark sides of dowry systems and the importance of girls’ education. Now I realise that my thoughts toward gender roles were very debilitating,” shared Prakash.
UMN’s gender equality project aims to promote reflection among the group members. Hence, the several review and reflection sessions have helped Prakash to be a change champion for gender equality in his family, group and community. He now helps Sunita do household chores, attends meetings with her and raises awareness about gender equality in his group and community. He has committed to providing his two daughters with an opportunity to study in higher education instead of giving them dowry and gifts. He wants an educated daughter-in-law for his son instead of dowries.
Go to: