Nepal’s lockdown included a ban on public transport. Reaching hospital is already hard in Nepal and may involve walking for hours to reach a motorable road before waiting for a vehicle to take you to hospital. In May 2020, deep in the lockdown period of the Covid-19 pandemic, these people with serious conditions reached Okhaldhunga Community Hospital and received timely care, perhaps saving their lives!

Want to know more of their stories?  How serious were their conditions?  How did we treat them? Read on here! 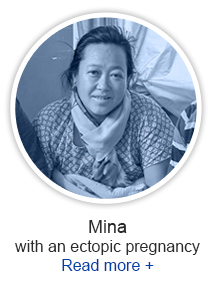 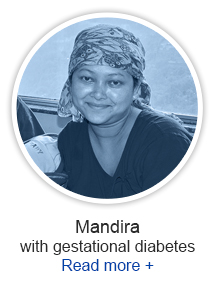 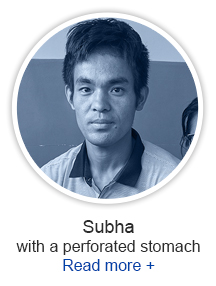 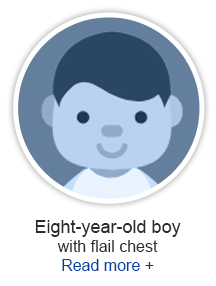 Mina Kumari, 42 from Solukhumbu (Over 5 hours by vehicle) 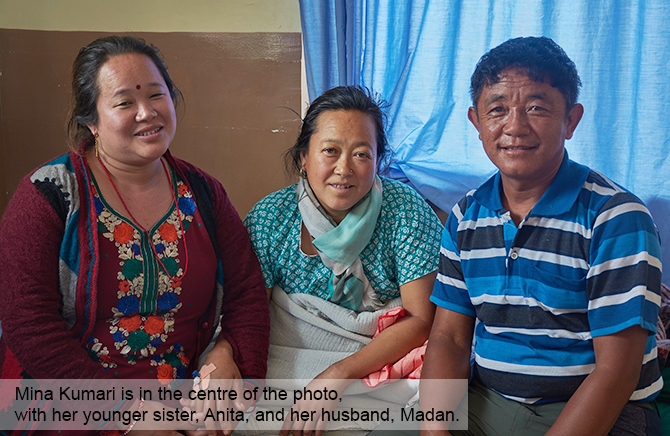 Ectopic pregnancy - Mina Kumari was referred to us from Solukhumbu district, which is immediately to the north of Okhaldhunga, and stretches right up to the Tibetan border. Mt Everest lies on this border between Nepal and Tibet. The district hospital is at Phaplu which is a three-hour ride in a vehicle to Okhaldhunga Hospital. Her home is 5 hours walking (or two and a half hours by vehicle) from Phaplu.
Condition - She had had a medical termination of pregnancy about one month before. She developed some abdominal pain in the previous few days and at Phaplu hospital they diagnosed that she probably had a ruptured ectopic pregnancy, and sent her to OCH.  She was indeed very sick, and very anaemic. Ultrasound showed blood in the abdomen.
Treatment and care given - She was taken for urgent laparotomy. At operation, she had at least two litres of blood in her abdomen. The blood and clots were removed and the problem was discovered to be a ruptured uterus, where the early pregnancy had ruptured completely through the top of the uterus. The torn rupture site was still bleeding. It was repaired with some difficulty.  She was transfused 4 units of blood.

Outcome - She made an uneventful recovery from this life-threatening condition over the following week for which we are exceedingly thankful. Her husband, Madan, and her family are grateful to still have a wife and mother. This photo was taken 6 days after the operation.
Back to top 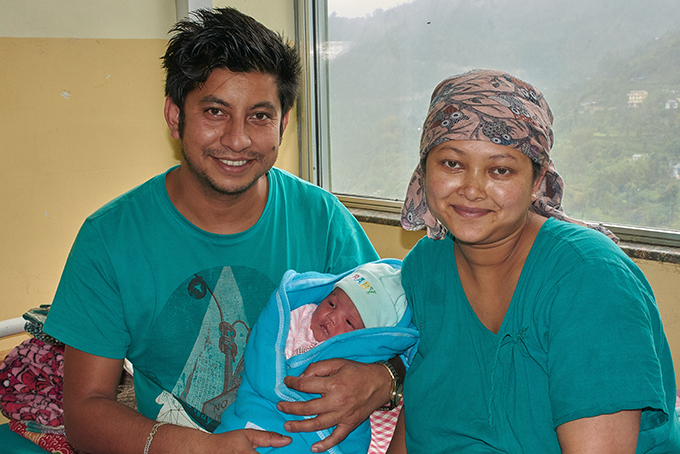 Gestational diabetes - Mandira developed gestational diabetes in her second pregnancy about 5 weeks before her due date. Additionally, her blood pressure increased (which sometimes happens in late pregnancy). She needed increasing doses of insulin to help control her blood sugar and treatment for her blood pressure. She had had a previous caesarean section for her first pregnancy. This is a difficult situation managing the needs of the mother and baby. Diabetes in pregnancy can lead to all sorts of problems, the most serious of which is sudden intrauterine foetal death.
Options - Generally, we like these women to have their babies a week or two before their due date. But the earlier we deliver these babies, there is increased risk of the baby developing severe respiratory distress of the newborn. We had a baby like this earlier in the year, who we induced about 12 days early, but the baby got respiratory distress and died aged day 2 of life. Raised blood pressure is another reason to consider early delivery of the baby.
Treatment and care given - With Mandira, we planned to do an elective caesarean section about one week early. Her husband, Nishant, was anxious about the situation and at one stage was wanting us to intervene earlier. It takes time and gentleness to talk through all the factors in this kind of case, so that the patients and their family can understand what is going on. Managing her blood sugar and insulin around the time of the operation was problematic and caused us some deal of anxiety.
Outcome - Fortunately, both mother and baby did well, and had uncomplicated recovery. The family were very happy and went home a week after the birth. She will come back for review of her blood sugar and blood pressure after a month.
Back to top 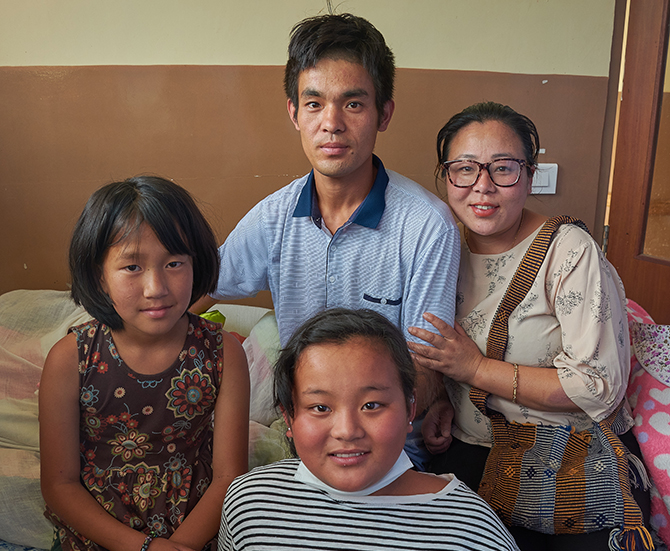 Perforated stomach - Subha Raj is a real local at Okhaldhunga Hospital. He lives in the village of Sobru, where the hospital is located. Otherwise healthy, he developed sudden abdominal pain one morning, and was diagnosed with an acute perforation of his stomach or intestine. He needed an urgent abdominal operation, which revealed that he had perforated his stomach and there was stomach acid leaking out into his abdomen. This was repaired by our senior Nepali doctor. He recovered well as can be seen by this photo which shows him one week later, with two younger sisters and his aunt, Shanti, who is one of our operating theatre nursing staff.
Back to top

Flail chest - This boy fell off a ladder and sustained blunt trauma to the right side of his chest. He developed a flail chest, which is the result of one or more ribs fracturing in two places. This is potentially life-threatening. On the day of arrival, he was stable, but the next day his condition deteriorated, and our Nepali doctors expertly inserted a chest drain into his chest. He had at least 250ml of blood in his chest which was drained away. He was given a blood transfusion. He slowly improved, the chest drain was removed and he left before we could ask to take his photo or confirm where he was from!
Back to top
We give thanks that these patients reached us and that our staff had the skills and resources to treat them. We give thanks for your support and prayers and for God meeting our needs and bringing healing!